Sitting on that dry-stone wall, he was observing his legs dangling over the ground.
The sun was warming his back and his body’s warmth was rising up to his nape turning in steam.
He was sweating profusely that morning, but he had  non intention to move from his position, as if doing it could mean to break his train of thought.
The ground under his feet was parched, the grass dry: since years it hadn’t been seen such a unwatered summer even the sea, on the horizon, didn’t manage to let its coolness arriving.
“Everything would have  finished”  he  told  speaking to himself “… and, with the rain, normality’d have come back.”
It was a question of waiting, after all Time had within itself its recurrence, it was circular.
Right this consideration was continuously getting into himself preventing him from moving till when he wasn’t fully convinced of it.
“A time without recurrence was like an echo without voice, it’s a nonsense” he repeated to himself.
And yet the years was passing by and it was impossible to go back and live again that time when, happy,  as children played with little moulds on the beach.
So time didn’t have a recurrence.
No, this wasn’t the truth, he felt it  and in the deep of its being.
He recalled a book that, when he was a child, his mother read him  in the evening,  close to his bed, trying to recreate that intimacy lost during the  day.

On the cover there was an enchanting image; the author had painted a child standing on a planet infinitely small: it was “The Little Prince” by Antoine de Saint Exupery.
So he remembered the words that the character of the fox addressed to the Little Prince: “ It is only with the heart that one can see rightly; what is essential is invisible to the eye”.

To get to understanding it was necessary to change ourselves into  new archaeologists to the quest of evidence that could bear witness before our own being, the hidden ego, to wait, then, for a decision from the heart.
As first, he thought, it was a true and irrefutable proof that the heart was spherical not flat, it has a  beginning and an end and in its movement it come always back  at its starting point.
Then there was the moon: every 28 days the tides  submitted to its magnetism and made the level of the sea lift up. Both were  cycles with fixed rules.
Even to be born and to die was a  cycle included in a space of time, but irregular, subject only to the destiny or, to be more exact, to our own way.
He understood, while a light breeze was caressing his body, that he had to put himself in a more distant position to catch the sense of his owns thoughts.
Not physically, but mentally: he had to keep distance.
Ideally go away from Earth, fly high…so high to be able to see distinctly the movements both of the planet and of its satellite and those of his feet… now intent on whirling.
Those were all circular movements, only the periods were different. Their length depended on the obstacles that they could have found in their orbit.
“Any problem, at the moment, for earth and moon” he thought, some more for his legs if he hadn’t be well careful to avoid the branch of fig that went out treacherously from the wall where he was sitting, just here by his ankles.
Yes, in comparison with the orbit executed by his feet the course of the Earth’s was infinitely longer to be comparable, if seen from its inner, to an endless long straight street.
His heart, then, understood: Time was circular, to see it depended only from the dimension in which someone stayed.

It was true that we are born to grow and die but this is in the order of things just as a tree whose fruits sprout as buds, ripen as fruits to fall down on earth and decay.

It crossed his mind the image of a tree with a oval foliage among whose leaves and fruits, on the branches, where resting a lot of birds and he couldn’t help considering the comparison in its total perfection.
It existed for sure a linear time, eternal but it didn’t belong to our earthly dimension.
It was true: Time was circular so as government and politics of men, that wanted it linear, these were things torn away from real life, simple projections of imagination fitted only to better rule the course of events.
A zero year served only at this, it was only a practical element… for nothing real!
It was demonstrated by the dissimilar times that the earth’s cultures run in different forms: the Chinese year, the Hebraic, The Anno Domine and the Indian time. All different.
Discordant dates, that however attested a same time, stayed as sign that all were a convention continuity. An accepted false.

Time had a circular motion and, at  every recurrence, it took with it changes and waste, a kit that high tide flung on the beaches for someone to pick it up and threw away what polluted.
Now the essential of his thought had been reached but something still was out of tune slipping to his perception.
“How putting in all this the utility of the Carpe Diem, seizing the moment?” he ask to the own ego.

In that ancient Latin sentence it wasn’t implicit the idea of consumerism but that of build and keep every moment of our life.
To take advantage of life to live and build it without leaving anything to the stream, no meeting should become waste.
Carpe Diem had in itself  high morals but, to understand them, it was necessary to put himself again at a certain distance to catch the thought interely and analize cause and effect.
He remembered when, with his father, had been present to the showing of the wonderful movie by Peter Weir “Dead Poets Society” (ndr:1989 Oscar for the best screenplay) and of what he had, in that occasion, identified himself with the character of one of the protagonists, Neil Perry, a boy  of his age, devoting himself, fervent of his self enthusiasm, to discover the hidden meaning of Carpe Diem. 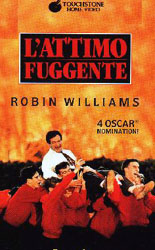 Then he didn’t succeeded. Now, on the contrary, he felt himself very near to truth.
Living every day of his own life as if it was the last it didn’t mean to abuse of it throwing away what he had consumed in a troglodyte’s appetite.
On the contrary the aim was to share our own route with whom, from the moment of the encounter, would have made always part of it.
Any superficiality acting but  a consciousness that every encounter represented not only an opportunity but above all a union in the course of  our own life, be it the representation of a friendship, a love, an acquaintance, an employer relationship.
Nothing was an end in itself, everything  cooperated.
Carpe Diem taught to grow up and to learn living our own relationships with the view of an immediacy and of a continuity so to give, to the history of times, fruitful memories and no abandonment.

Sun was hitting hard, his temples was hurting … in him grow up the fear to have caught a sunstroke. He climb down from the wall to run home to his mother and, in doing so, he made sure to put on his head the cap that she had obliged him to wear that morning.
He was only eight but the conversation made on this wall with his inner ego, his archetype, would have been useful for the rest of his life.
While he was running home at breakneck speed he closed, to himself, how little counted, in the end, if time was intended as circular or  rectilinear, because the important was living it well!
Carpe Diem !

Me too had done a pact with my inner ego.
I was three, my parents had divided a short time before, and I had decided to grow up no more.
Due to my age I had no acquired knowledge but my archetype knew what I didn’t know yet  and consented to the pact.
Actually a part of me, still now, has remained childish and although life along its course had taught me, sometimes  to my cost,  a better understanding didn’t manage to free me from that mutual commitment… contracted for fear of falling again in the same mistakes.