In italian language ‘tramite’ is  synonym of path,  a passage that people shall cover to join two separate realities.
Translated in english language it  is ‘go-between’,  the messenger,  even if  the ‘go-between’ it cannot be  identifiable with the image of a Cupid, in the act of shoot love’s darts, but with the mean used by him…the arch!
In the allegory by the painter Tiziano, that portrayed  Love initiation ( ndr L’Amore Bendato. Galleria Borghese Roma), Venus is portrayed  with two Cupids at her sides: one blindfolded, the other with his eyes wide opened and attentive. Arch and darts, in the painting, are taken by two  clearly different figures just to underline their different  use. The woman who takes the arch  has the features  of the chaste Diana while the darts are committed to a passionate and partly naked figure.
Comparing the mean to the arch, the go-between and hence the man… it results that the darts should be equalized to the images, to the words and the emotions that have the task of  opening a way when the aim is reached. 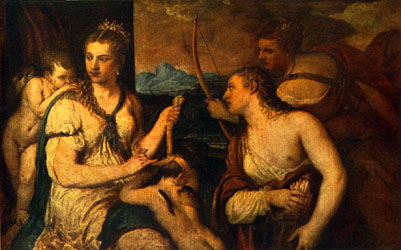 For that they will be full of  passion and partly naked, full of truths that cannot be hidden.
The ‘go-between’ is a pure that let itself  be run through, an instrument which use permit to reach the desired objectives by an attentive, but successively blindfolded, son of Venus.
Without being too much fascinated by the figure of Cupid, which embodies the philosophy of  “docta ignorantia”  whose searching spirit shall in the end leave place to the impulsiveness of passion, yet preserving a role of counsellor,  it is necessary to put our attention on the means.
The arch, kept firmly, is used with an eye that looks with an extreme precision, but that let itself be diverted, in a moment of strain, when it leaves the dart that flies off and  hits,  like this, blindly.
The artist is the arch, the means, the go-between…is he who, pure and neutral, let himself be run through by knowledge for total usufruct of an unknown aim.

obtained these cognitions precociously, fruit of my personal experiences, during a part of my life when I get the gift of a close encounter with a ‘go-between’.
Conceptual artist par excellence ‘Alighiero e Boetti ’ followed a stretch of my existence, marking it indelible.
Alighiero, in a self-portrait, depicted himself riding an ostrich and, adopting the features of a spring archer centaur, he signified the temper of the Sagittarius, under whose zodiacal sign moreover  he was born. The man half ostrich /horse represented the still animalist part of his artistic being and the indissolubility from the use of its means, the arch.
With him I had a short and secret love story that ended in a relationship of tender and protective friendship. Our love began in his studio in piazza Santa Maria in Trastevere and went on during some journeys we set out on together. In the year 1977 we went to  Venice, Milan and  Zurich on the occasion of an exhibition of his  organized by the  Gallery  Anne Marie Verne, during a particular and folkloristic carnival. 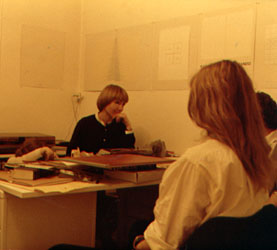 Alighiero shots picture of Anne Marie Verne and me

As every artist, Alighiero had the gift of putting himself as a go-between for knowledge, he let himself  be run through by the holy fire and his art became  prompt portrayal trough those which he used to call ‘Signsanddrawings’. The first surfaced through his hand, the second were read and  subsequently interpreted by himself.

In Zurich we were guests in a small hotel in the old town and, in our room, the walls had as a ornament a straight line that went down obliquely after covering, horizontally, a long stretch of wall. 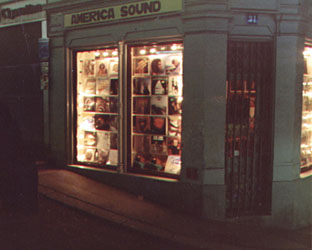 The shop just in front our small hotel

Only after leaving the desires of our bodies, free of find ourselves…when  by now, sated with love,we were languishing in the semi-darkness of that afternoon, only then our consciences woke up.
“Look what a strange course follows that line on the wall…” I told him becoming aware, in that moment, of the particular decoration .
“It’s true, there’s something missing…” answered me Alighiero getting up from the bed and running on impulse to draw on it a sphere in the point of going down the slope.
That was the ‘sign’…the rest was the ‘drawing’,  the consequence not known!
Did the sphere express the desire of sliding following the slope or would have it stood there still in its potentiality  forever?
The answer was committed to the chance, to the unknown.
The artist stopped here, at the portrayal of a consonance.
Just as a violin player that makes his notes poise in the air…not all of them will touch  the soul of the present people. The consonance will reach, among them, the luckiest touching on the sentimental notes  while a shiver will join them to make them feel an indissoluble part of a whole; a whole not known but of a so high spirituality that it isn’t possible to raise doubts about its hidden benefit.
The representation I had witnessed that day, showed me clearly the charm that any form of art would have impose to my being… becoming, for me, always redeeming.
At that time I was little more than a young girl that was groping her way in the life, even confused by the use of some joint too many! Art provided me, later on,  with the spirit to recover the lost values.

During our stay in Venice, guest of Hugo Pratt’s illustrators, we went, in the night, always around in the desert  paths… when everything was still, forever given to a time without time. The lack of streets, with cars running, gave the sensation to be inside a medieval stage. The bridges suspended over the still water, the external walls of the houses carved by what we called ‘druid signs’…all this brought us to dream and live in a fairy world where everything was possible, every thought realizable. 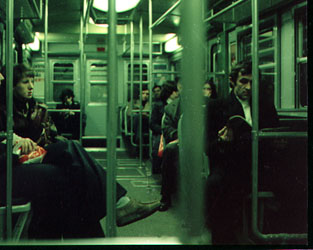 Alighiero told me how ought to be Venice once…before the plague.
In memory of the tragic events, caused by the miasmas of the plague, every gondola, after an edict, was pitched,  were removed the coloured tapestries from the windows, abolished the banners from everywhere  and the shining town on the lagoon became what we see nowadays…duller and grey even if  splendid all the same.. but, through those  paths, we go on for centuries to walk. At least, we could keep on enjoying of this!
Venice is the ‘go-between’ through which the knowledge could easily reach us; it is a temple under the open sky in which we can still live and receive from its stones the benign influence of past but still present civilizations.
“We are what we are because what we were” this is the sentence that  signifies at its best the concept of the movie by Joseph Losey, shot in 1970, entitled  “The Go-Between” with Julie Christie, Alan Bates and Edward Fox.
In the plot of the movie, scripted by Harold Pinter based on the autobiographic short story written by Leslie Poles Hartley ( 1895-1972), it’s not  knowledge to use the go-between  but the human beings to involve a ‘pure and innocent’ thirteen-year-old boy as a messenger for their forbidden and Victorian love story.

A young wide open eyed Cupid that is involved and shocked, for life, by the events caused by his intervention.
It is, maybe, for this other way  that Venus blindfolds Cupid: to preserve his psychological  entity not acquainting him with the effects caused by his darts..
A ‘go-between’ can perceive and make visible a consonance, a message of knowledge but doesn’t know the receiver, it ignores the final pattern.

At this point  it takes me the sudden desire to add further knowledge, even if I run the risk of  giving the virtual image  of a caravan on is way to which has been added a new coach! My last experiences refer to a particular  ‘go-between’, which I  identified in the dance of the Tango and in the chords of its music.
Consonance is a hope that comes true and, in doing so, causes the conditions to be able to hope again, to see again lamps of light, only lamps…instants… in which it is possible to taste the essence of life; closing our eyes and lowering the brim to become go-betweens “touching” an instrument ( ndr: touching from latin tangere) and feel the notes of a Tango that take life, “strassi de vitta” (shreds of life)! Pure melancholy having been close, but never enough, to that dreams that realizes in the transient reality of a Tango, in the music that, more than other, embodies the principle of a constant evolution. The origins and the aims are unknown: it is the eternal research of a composition by an interpreter…be it a musician or a  dancer! 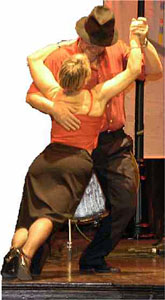 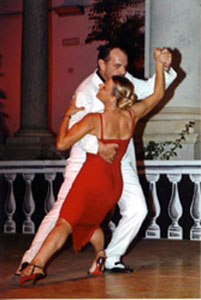 Following the harmony of life

The Tango, go-between of life, combines African rhythms,  Andalusian chords and Cuban habaneras to give life to Argentine Tango. The Tango Flamenco, already in the  XV century, was imported by the Moors in the south regions of Spain and, being an ambiguous dance, was banned, with official actions, by the north regions of Spain and adopted by the community of Spanish gipsies that moved continually from a locality to another, so eluding the urgent prohibitions. With the migration of the Spanish gipsies towards the Central America  tango put new roots in Cuba and from here it was a short step arriving in Argentina.
The voluptuous interlacements of legs owe their  derivation from the steps of the Cuban habanera.
Music of liberation for emigrants, of every time and place, was danced in the new world in the streets and in the squares, in the conventillos and, after the new restrictions as was considered  outrageous usage and even homosexual, in the brothels of Buenos Aires.
The rhythm of vals,  flamenco,  canyengue,  condombe, enriched of milonga!
Tango originates from poverty, sufferance,  mud, from the absolute necessity of believe in a liberation by a myriad of people coming from different ethnic groups that, mingling themselves, formed the most yearning, fascinating and involving form of music, words and dance.
A poetry originating from a people of excluded that became a heritage of the whole world.
The Genoese emigrants mingled with emigrants from every race and met in Argentina to dance the milonga; with difficulty, they set free what remained of their life…through the go-between of a Tango they began again to live it. 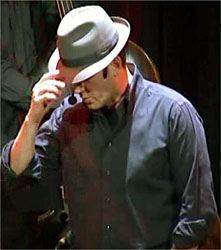 and run the tango dancer, run as “el loco” on the eaves of the argentine roofs… with a “swallow in the motor”  ( sentence in the  slang of Buenos Aires to indicate a person out of sort)
In the Tango countersense, contradiction is emphasized: sometimes is the music that follows the dancers, others it is “a sad thought  that is being danced”…but, always, in its notes is present energy, dynamism and happiness!
It’s the perfect realization of a desire that lasts the time of its becoming, a dream not told where music, steps are not codified but come from an intimate and extemporaneous concord.
Strassi de vitta (shreds of life)!